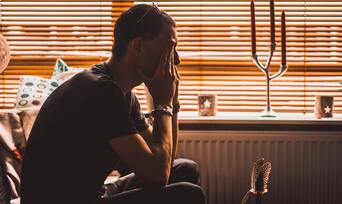 In summary so far, the responses outlined above are the immediate moving aggressively towards or backing away from physical danger: Mastering of Danger. Next, there is the response of being overwhelmed and shutting down in response to a threat either rigidly or in collapse: Managing of Overload. Then in response to long-term psychological danger, there is engaging or disengaging from interpersonal control: Manipulating of Others. The next two responses are also framed in partnerships, but in relation to managing the danger within a social interaction like a conversation or meeting. Following the model, there are also two opposing ways of closing down a psychologically or socially situation that is threatening.

Look Away Towards Me 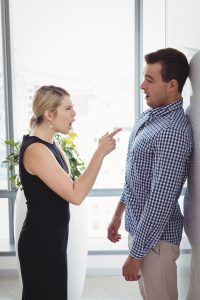 The first is the Frenzy Response; when a person goes into a manic state and in a disorganised manner takes over the social space. This leaves no room for others to contribute and is chaotic enough so they are not able to easily take control; essentially they create a type of safety by taking up all the space so no one else can. This is a response commonly seen in therapy when the client feels that some internal material will be too much to handle.

It is also seen in certain psychiatric disorders like anxiety or borderline personality disorder for example. It is one way to conceptualise a troubled teenager who is taking up all of the space in the household to prevent greater threats from developing, like an argument between their parents. If everyone is focused on their drama they are setting the agenda; so while they may be receiving negative attention this is better then some greater danger.

Pouring it All Out

The social threat partner commonly used is similar to Frenzy in that it takes over the space in the conversation to disable others from any level of control. However, it is not chaotic, but highly directional and focused. And it is not about managing the other person as much as releasing the internal pressure. This is the Fountain Response; where the person rapidly and intensely pours out everything that is inside. We could see this as a frantic venting of an intense emotion. The tactic puts the person evacuating at the centre of the conversation. Instead of trying to shut down and overwhelm the other person, it has the effect of drawing them into a position of sympathy and care. 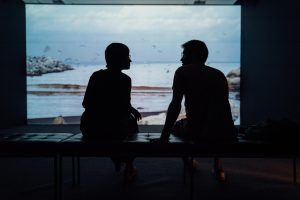 Although this might be seen as a healthier response, where you are getting an emotional release and potentially some support. It is still a psychological pattern that is aimed at managing threats that do not move the person out of the victim position. This is because the response is still uncontained; it is still coming from survival mode and desperation. The strategy is not actually to shift the evacuator into a position of power, but needs the receiver to rescue and assume the task of containing.

These are still mainly responding to threats applying psychological patterns that are outside of conscious choice. Evacuating everything that is inside, largely indiscriminately, is still an extremely uncomfortable position with the person feeling like they’re in danger and needing to defend themselves. In addition, the emotional catharsis may be short-lived, because there are likely little boundaries around this manic response: is this a safe person, a safe situation, how will the use this information. The person can feel extremely vulnerable afterwards as they probably shared internal experiences that they did not expect or plan which can lead to shame, regrets and feeling exposed. This does not then feel like relief or shifting into a position of been empowered.

In this Blog post, we extended our understanding to threat responses by including Frenzy and Fountain, in the next post we discover the ways that we organise our personalities as a survival strategy.